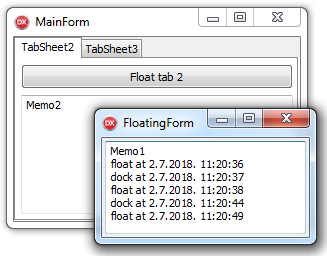 One users asked: “Can we undock this tab so that it floats and then activate other tabs on the page control? We would also want to dock the viewer tab back. Further, we have two monitors and would like to move the floating viewer to the second monitor.”

The TPageControl is a really handy pick when you need to create tabbed interfaces where only one tab sheet is presented (visible) to the user at one time. Each tab of a page control can host different controls and thus allows to create complex user interface designs.

Drag and Dock – No Go

Trying to implement the above user requirement by leveraging Delphi’s built-in drag’n’dock support was a no go. There’s only one docking site (tab sheet / page control), docking a form to a page control automatically adds a tab sheet, screen refresh rate was very bad while starting the undock operation, dragging was actually not needed, and so on.

Dock As Tab Sheet + Float As Form + No Dragging

The user only wants to be able to undock / dock a tab sheet to appear as a floating window – no dragging to float/dock is needed.

The answer was simple: I’ll only change the parent of all the controls on the tab sheet – and move them to the “stay on top” form.

Generic solution to undocking and floating parts of UI

So, to have this, I’ll need to

Ok, let’s see what we have here:

The main form hosts a page control and a few tab sheets. Each tab sheet has an “undock me” button. Clicking the “Float tab 1” button implementation is just one line of code:

“Floating1” is a property of type TFloatingForm. The property is read only and lazy instantiates the floating form:

The floating form gets created only when needed – i.e. the first time we want to undock TabSheet1 by clicking on the Button1 button.

There are some events raised by the floating form when it it goes to the floating state and when it gets closed to mimic the dock state. Note that the floating form always floats – it is only visible when needed – when child controls to some parent (tab sheet) are “undocked” and hosted on it (the form).

Do note that you do not need to re-write any programming logic for the controls originally hosted by the tab sheet. When you do “Memo1.Lines.Add()” you do not care if it is inside a tab sheet 1 (docked) or inside the floating form (floating).

That’s it. Super easy and you can use the TFloatingForm as the skeleton for all your groups of controls on a common parent to dock / float them.

I’m using the same approach to “undock” part of the user interface where there’s no tab sheet nor page control – to float a panel hosting other controls.