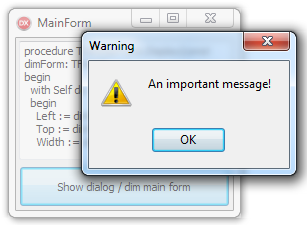 To emphasize the importance of a modal form and the information it presents, you could gray out the main form of the application when the modal form is activated.
END_OF_DOCUMENT_TOKEN_TO_BE_REPLACED

Among various types of dialogs (and the information inside) you present to the user, be it a warning, error or information, one type actually requires no user input. Such dialogs are those displaying only the OK (or any single) button. It is questionable should you even have a dialog stating something to the user where the only possible user action is to click on the only button (+ the [x]) displayed by the dialog. Anyhow, I’m certain you have (at least I do) lots of those (…,mtInformation, [mbOk], …) scattered around your code.
END_OF_DOCUMENT_TOKEN_TO_BE_REPLACED 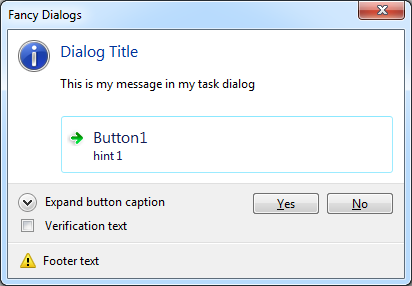 Using MessageDlg can result in 2 different displays of the actual message dialog. What will get displayed (and more importantly how) to the user is dependent on several factors including the following: Windows version your application is running on, if the application was built including runtime themes and if Windows uses themes.
END_OF_DOCUMENT_TOKEN_TO_BE_REPLACED