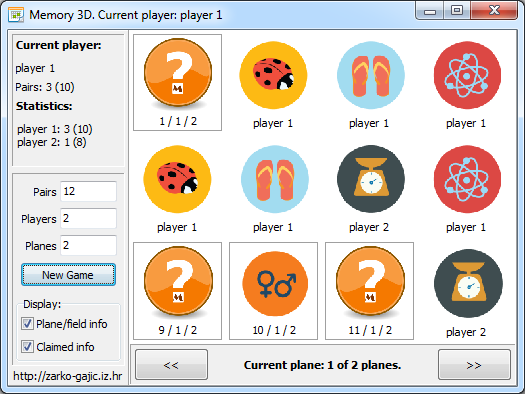 “If you want it to be playable and more interesting you need to jazz it up a bit!”

That’s what’s been cooking in my head from the time I’ve finished implementing the back end for the game of Memory (Match Up, Concentration, or whatever you are used to call it). As a proof of concept, I’ve coded a very simple application, aka the front end for the game – juts to have a workable user interface.

Now, the time has come to finish the series and introduce a more eye candy version of the game, one that’s not using dull buttons with numbers for field display values but that actually looks like card game type of Memory, with nice fancy images/icons for game fields. Why stop there? Why not go a step forward and introduce a new dimension for the game: make it 3D having fields appear on planes/layers, so players need to switch between planes to match a pair.
END_OF_DOCUMENT_TOKEN_TO_BE_REPLACED

I guess you know you can run your browser in full screen mode using the F11 shortcut key. Windows Explorer also supports this feature.

Running in full screen, where an application UI covers the entire screen, over the TaskBar and any Desktop/Tool bars, is handy when a user has a limited screen size (laptops) or when you just want more to be visible by the browser or the Windows Explorer.

END_OF_DOCUMENT_TOKEN_TO_BE_REPLACED 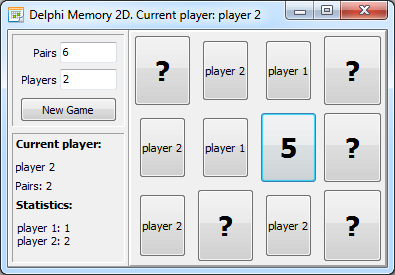 Since the TMemoryGame class is framework agnostic (and not platform specific), it is up for you to decide if you would like to do a classic Windows VCL application, a FireMonkey Android mobile game or something that works on a Mac. To make it quick and simple, I’ll go old-style VCL school.
END_OF_DOCUMENT_TOKEN_TO_BE_REPLACED 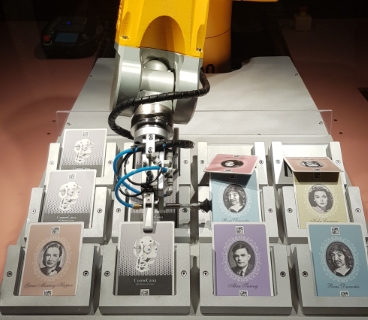 In my version of Memory, I’d like to separate the user interface (front end) from the game logic (back end) as much as possible. I want to create a game model in OOP style – where the game logic does not interact (or as less as possible) with the front end.
END_OF_DOCUMENT_TOKEN_TO_BE_REPLACED

How about extending what TButton has without the need to create a derived class with a different name?
END_OF_DOCUMENT_TOKEN_TO_BE_REPLACED 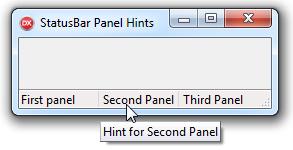 You cannot? You can! Here’s how to implement TStatusPanel.Hint for each panel on a status bar…
END_OF_DOCUMENT_TOKEN_TO_BE_REPLACED 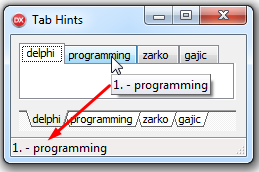 To have a set of tabs for the tab set control you specify a list of strings as the value of the Tabs property. Ever wondered how to have specific hint for each tab?
END_OF_DOCUMENT_TOKEN_TO_BE_REPLACED 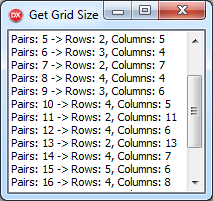 In a game with an arbitrary number of game fields you might want to have the board look as closely to square as possible (rectangle where height and width are the same). Think of Memory. Let’s say we have 24 cards, that is 12 pairs. If you want to place them in a rectangular grid, most similar to square, you would go for 4 x 6 (or 6 x 4) board size (as it would look more square like than 3 x 8 and 2 x 12 or 1 x 24 would be too wide).
END_OF_DOCUMENT_TOKEN_TO_BE_REPLACED 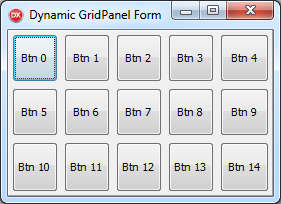 That’s all great when you know the design at design-time – and you know what number of controls you want to be hosted by the grid panel.
END_OF_DOCUMENT_TOKEN_TO_BE_REPLACED